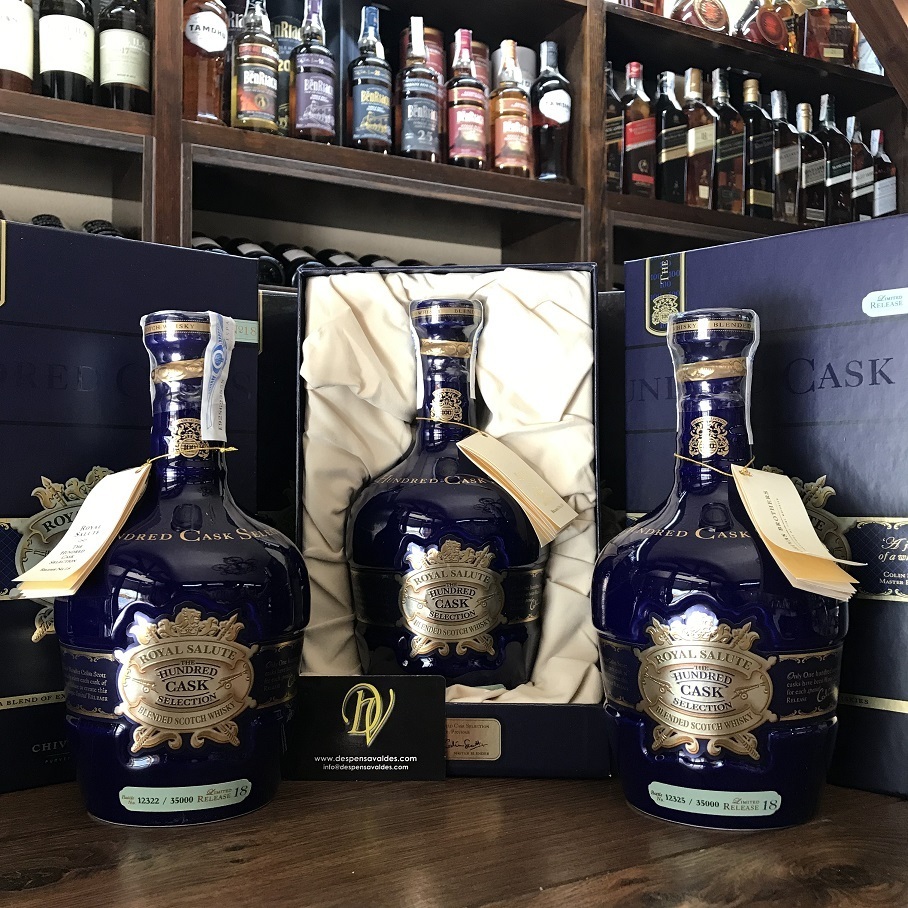 An ultra premium whisky produced by the Chivas Brothers in limited release (where there are only 31,999 bottles in the world) of 100 aged casks hand-selected to create a silky creamy whisky of exceptional elegance. A blend of one hundred casks, boasting between twenty-two and forty years aging. This exceptional blend of individually selected aged whiskies has rich aromas of sweet plums with underlying vanilla and almond flavours.

Royal Salute 100 Cask Selection is an ultra-premium blended Scotch whiskies belonging to the Royal Salute range from the house of Chivas Brothers. It is the only Scotch whisky range in the world that begins at 21 Years old and over.

The entire line of whiskies was first created by Samuel Bronfman when he commissioned the very first blend of Royal Salute with the 21-Year-Old in 1953, intended to be presented to Queen Elizabeth II on the occasion of her coronation.

History of the Royal Salute 100

The very first bottle of Royal Salute was created in 1953 to commemorate Queen Elizabeth II’s coronation. Samuel Bronfman, then owner of Seagram’s who owned Chivas Regal commissioned the blending of a Scotch whisky that would be fit to be presented to a monarch, and the Royal Salute brand of whiskies was born.

Since then, Royal Salute has released a number of bottlings and expressions of blended Scotch whiskies over the years to mark major occasions and milestones of the British Monarchy such as the anniversaries of the Queen’s coronation, the Union of the Crown among others.

The Royal Salute 100 Cask Selection is an expression that was released by the brand in 2004. It is one in the line of many ultra-premium and rare bottlings of some of the finest, vintage and rare whiskies available today.

Bottled in porcelain flagons created with utmost precision and meticulous attention to detail, created using only the most prestigious raw materials and expert craftsmanship, the Royal Salute decanters itself are an embodiment of opulence just as much as the excellent Scotch whisky they hold within.

Making Process of the Royal Salute 100

The Royal Salute 100 Cask Selection blend is created by marrying the spirit that comes from a hundred different casks of various ages between twenty four years, and even forty years.

Almost every blend created for Chivas Regal contains a fingerprint malt whisky distilled at the iconic Strathisla Distillery in Moray in the Speyside region of Scotland. Established in 1786, it is one of the oldest and continuously functioning distillery in the region.

Apart from malt whiskies, a number of rare and premium grain whiskies too make up some of the hundred casks used for the Royal Salute 100 Cask Selection blend, creating an impeccable balance of flavours, aromas and texture.

Alcohol Percentage of the Royal Salute 100